The answer to this is not only "because you can!", but it also allows you to

The meta-rauc-community Yocto Layer was initiated by Leon Anavi in the context of two talks held at the ELCE 2020 and the Yocto Project Summit 2020 and an additional blogpost. It started with support for the Raspberry PI, but has since been extended with support for more platforms.

Luckily, there is no need to perform a full integration of RAUC here on our own. Instead, we take advantage of the meta-rauc-community-Layer.

During our annual Pengutronix-internal hacking week 'TechWeek', I finalized my support for integrating RAUC for the x86-64 QEMU platform in Yocto/poky and contributed this to meta-rauc-community. Some additional fixes I recently contributed as part of the preparation of this tutorial.

So let's get started with using this!

The integration shows one possible example of a redundancy boot set-up with RAUC on x86. The layout is a symmetric A+B system with an additional rescue system. The GRUB bootloader (started by the UEFI firmware) is configured to select the proper boot target.

To demonstrate the bootloader update capabilities of RAUC, it is also configured to allow updating the EFI partition atomically (by switching the GPT entry).

For the tutorial, it is not strictly necessary (but recommended) to have basic knowledge of embedded (Linux) systems and the Yocto project.

As no hardware is involved, all we need to follow this tutorial is a shell on a Linux system. It could also be virtual machine but should be powerful enough to build basic Yocto-based systems in finite time.

Also make sure to have the build requirements for the Yocto project installed.

First, we set up our build directory using poky and add some layer repositories that we will need in the following.

This example uses the honister-3.4.1 release of poky, but you can also use master or any future release.

The layer we actually need to activate are

(tl;dr: Scroll down to the end of this section and copy the lines from the box to your conf/local.conf.)

Now that we have sourced the environment and added the required layers, you could already potentially start building an image. But for an actually working set-up, there are some additional items to configure.

So far, adding meta-rauc only provides additional recipes, but does not change your build, yet. For some useful overrides of standard recipes (like busybox or linux-yocto) to take effect, we have to enable the DISTRO_FEATURE named rauc.

Thus you can open your conf/local.conf and add this line:

If your project already uses a custom distribution, that would be the proper place to set DISTRO_FEATURES.

To actually have RAUC installed into the core-image-minimal target rootfs image that we will use, add this line to your conf/local.conf:

As we intend to build and boot not only a file system image but a full disk image, we need to add some more configuration for gaining full UEFI boot capabilities:

It is recommended (but not strictly required) for RAUC to use systemd as your init system. If you intend to do so, you can set:

In your conf/local.conf (or custom distro config).

In a later step in this tutorial we also intend actually perform a RAUC update in our evaluation system. This requires being able to copy a bundle to the target using scp. Thus, as a final step, we also make sure that we have an SSH server installed on the target by adding to conf/local.conf:

As a copy&paste template, the additional content of your conf/local.conf now should look as follows:

Updates with RAUC are always cryptographically signed and verified using public key certificates according to the X.509 standard (as known from TLS, S/MIME and CMS).

The pki-tutorial from Stefan H. Holek may serve as a good starting point.

For this example scenario, we narrow this down to a simplified setup:

The meta-rauc-community layer already comes with a convenience script to create the required key pairs and integrate them into the build by automatically setting the required variables in the local configuration file conf/site.conf.

To execute it, change into the meta-rauc-community layer, run ./create-example-keys.sh and switch back to the build directory:

The result you can see when dumping conf/site.conf:

Now we have set up all that is required to build the project.

Make sure you have selected the proper distro poky and machine qemux86-64 in your conf/local.conf (both should be the default).

This will take some time, depending on your build machine. Grab a coffee. Or two.

At the end of the build process, you should have some artifacts in your machine's deploy folder (tmp/deploy/images/qemux86-64):

The symlink core-image-minimal-qemux86-64.wic is the most important here as this points to the full disk image we will use to boot from in the next section.

Having sourced the bitbake environment script, you automatically also have the poky QEMU wrapper script runqemu in your PATH:

This script eases setting up QEMU by reading a Yocto-generated QEMU configuration from your deploy folder and provides some convenience configuration options.

We call it with the arguments nographic for non-graphical mode, slirp to have network as non-root, ovmf to boot with the OVMF EFI Firmware, and wic to use the .wic disk image generated for our rootfs:

This will start the system and let EFI boot into the GRUB bootloader menu:

If you are interested in details on how RAUC interacts with GRUB and other bootloaders, you might want to have a look at the RAUC documentation here

The boot menu contains a boot entry for each slot (A, B, rescue) used in our redundancy setup (as described above). The values in brackets represent variables persisted in the grubenv and used by RAUC to select the proper partition to boot.

If not already selected, choose Slot A here and press <Enter>, otherwise just wait for the auto-boot countdown to complete.

The QEMU should then boot your system up to the login prompt:

Now you are in a system that is running RAUC and is capable of being updated like a real system.

RAUC provides a command line interface for debugging and development purposes. This also allows us to introspect the current state of the redundancy setup. We can request an overview by calling the rauc status command:

For RAUC, the A+B redundancy slots are referred to as rootfs.0 and rootfs.1. The rescue system is called rescue.0 and the EFI partition holding the bootloader is referred to as efi.0

As expected, we see the rootfs.0 slot being the one that is currently activated and booted.

The slot names and values are not magic, they are defined in the plain text ini-style system configuration file /etc/rauc/system.conf.

The meta-rauc-qemux86 layer also comes with a ready-to-build recipe for a RAUC update bundle. In addition to a rootfs image, it also provides a bootloader/EFI image to demonstrate RAUC's capability of performing atomic bootloader updates on GPT.

This will leave an update bundle in the deploy folder under tmp/deploy/images/qemux86-64/qemu-demo-bundle-qemux86-64.raucb.

To check the content of this bundle on your host, you can manually invoke the rauc host tool by using the oe-run-native helper script:

You can also simplify specify the verification keyring by using:

As expected, the bundle contains two images: one for the slot of class efi and one for a slot of class rootfs. You can also see that the compatible matches the one defined for the target system. So as this looks correct, let's install the update.

To actually install the RAUC bundle in this example setup, we need to copy it into the QEMU system's file system.

As we have set up slirp, we can do this over network via scp:

The port must match the one printed as hostfwd for port 22 during qemu startup in the line:

Also note that you might run into scp failing if invoked too early and the keys on the target side are not created, yet. Just retry after a few seconds in that case.

After copying the update bundle to your QEMU target, you can run rauc install /data/qemu-demo-bundle-qemux86-64.raucb from within QEMU to start the actual installation:

After successful installation, RAUC activates the formerly inactive slot. It also stores information about the update in the configured central status file /data/rauc.status.

You can inspect this all by calling rauc status --detailed:

Note the different slots referred to as "Booted from" and "Activated" (and the x marking rootfs.1 now).

You can now reboot into the just-installed system using normal reboot (or systemctl reboot when using systemd).

As upon first boot, you will see the GRUB boot menu again, but now with the Slot B entry being pre-selected:

Just wait for GRUB to continue and see your freshly installed system booting up.

As the very last step in our tutorial we'll verify that we actually ended up in the correct situation.

For this, we call rauc status one last time:

As you can see, the booted slot (marked green and having the booted flag set) is now rootfs.1. You can also see that it is reported as the slot being mounted to / and thus is actually your currently active root file system.

The tutorial ends here, you can now play around on your own, try another platform provided by meta-rauc-community, or start integrating RAUC for your own Yocto-/poky-based project and use cases. 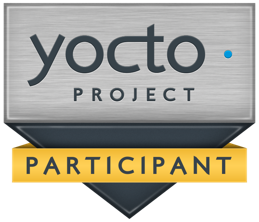